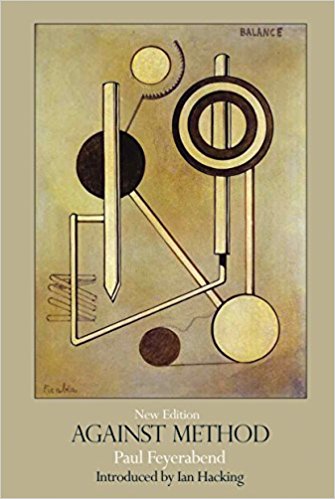 Against Method invokes rare emotions in philosophy of science: light-hearted fun and humor. Paul Feyerabend argues from science that we must deconstruct the pillars of reason and logic that prop up intellectual life. He goes so far as to argue that those who pursue unreasonable theories aid the pursuit of truth more than those who seek truth through reason.

While Feyerabend makes the arguments for relativistic deconstructionism with a disarming playfulness, his conclusions are nonetheless gravely dangerous. Feyerabend correctly shines a light on many issues with science as the sole arbiter of truth; he unfortunately wields these critiques with haphazard destruction, pushing his conclusions much too far. Overall, I agreed with Feyerabend much more often than I disagreed with him; however, Feyerabend’s unfortunate conclusions are self-defeating, relativistic, and deconstructionist.

Against Method invokes rare emotions in philosophy of science: light-hearted fun and humor. Paul Feyerabend argues from science that we must deconstruct the pillars of reason and logic that prop up intellectual life. He goes so far as to argue that those who pursue unreasonable theories aid the pursuit of truth more than those who seek truth through reason.

Feyerabend’s critique of science as the pursuit of truth represents the non-realist position with greater lucidity than many other authors. Feyerabend argues with joy and elegance, oftentimes convincing the reader without reliance on reason alone. His style is much like Galileo, using “psychological tricks in addition to whatever intellectual reasons he has to offer” (61). As Feyerabend points out, there is indeed more to science than the caricature that, “a person’s religion, for example, or his metaphysics, or his sense of humour must not have the slightest connection with his scientific activity” (3).

Regarding critiques of science, Feyerabend convinces that theory choice is about more than correspondence to data. Critically, science requires presuppositions and emotional choice. Feyerabend rightly emphasizes epistemic humility, that “the world which we want to explore is a largely unknown entity” (4). While Feyerabend turns this humility into an unhelpful deconstructionism, we can affirm his premises while rejecting his conclusion.

Feyerabend’s critiques of science center on the idea that “no single theory ever agrees with all the known facts in its domain” (33), and that factors aside from “facts” influence most scientists. Scientists, being fallible humans, are often incentivized by “peer pressure or by financial machinations” (138) to ultimately “forget the difficulties, never to talk about them, and to proceed as if the theory were without fault” (40). Far from being the infallible arbiter of truth, science offers nothing apart from the scientists who often use “ad hoc approximations” to “conceal and even eliminate qualitative difficulties” (43). The observation that science is done from the perspective of individual scientists aids Against Method.

Beyond his critique of science, I would affirm a qualified version of Feyerabend’s thesis, that “counterinduction” presents the most meaningful way forward for science. Counterinduction is the positive aspect of Feyerabend’s argument: that the practice of breaking methodological rules by emphasizing the areas where data breaks theories “is both reasonable and absolutely necessary for the growth of knowledge” (7). While Feyerabend correctly identifies that “Copernicanism and other ‘rational views exist today only because reason was overruled at some time in their past” (115), applying this observation as a rule for all science would undermine the pragmatic usefulness of most theories.

While I agree with Feyerabend that there must be some scientists exploring data that doesn’t correspond with theory, to make such a venture the aim of science would rob it of its benefits. Feyerabend tries to undermine the objective good that science brings about, reducing the method to abstract reflection without pragmatic function. There must be some scientists “developing hypothesis inconsistent with accepted and highly confirmed theories” (13), but that cannot be the primary function of all scientists without losing their benefits.

Despite Feyerabend’s pleading with the reader, that “You must also resist the temptation to classify what I say by giving it a well-established name, for example the name of relativism” (xvi), he nonetheless remains a relativist. Feyerabend argues that he is not a relativist because he contends that there are many ways to truth rather than claiming “there are no truths as such but only truths for this or that group and/or individual” (xxvii). Feyerabend misses the point that to affirm contrary truth claims undermines all truth claims.

Feyerabend argues several relativist propositions: “there is not a single rule that is not violated at some time or other” (7), “everyone can read the terms in his own way and in accordance with the tradition to which he belongs” (11), education “must under no condition bend their minds so that they conform to the standards of one particular group” (165), and “continued insistence on the ‘objectivity’ of value judgments however would be as illiterate as continued insistence on the ‘absolute’ use of the pair ‘up=down’ after discovery of the spherical shape of the earth” (231). In other words, in the face of problems with finding truth, we should instead make all truth perspectival.

Feyerabend’s turn to relativism leads to self-defeating claims. One major problem with “anarchistic” philosophy, as Feyerabend would call it, is that anarchism becomes one more objective method that must be overthrown. For example, many argue that reason is an objective reality because one must use reason to refute reason. Feyerabend leans into this charge when he states, “an anarchist is like an undercover agent who plays the game of reason in order to undercut the authority of reason” (16). While true, that statement should undermine anarchistic philosophy, not support it.

If Feyerabend’s philosophy were true, several of its core tenants would become false, to give some examples: “I want you to sense chaos where at first you noticed an orderly arrangement of well-behaved things and processes” (xv). If Feyerabend were right, then philosophy of science would no longer be chaotic, and his point no longer true. Feyerabend also states, “Variety of opinion is necessary for objective knowledge. And a method that encourages variety is also the only method that is compatible with a humanitarian outlook” (25). While Feyerabend encourages variety in theory generation, he discourages variety in methodology. In other words, Feyerabend’s own method would become inhumane.

Two of the most glaring self-refuting arguments are when Feyerabend condemns traditions and rules. Concerning rules, “there is not a single rule that remains valid under all circumstances and not a single agency to which appeal can always be made” (161). If this were true we might discount Feyerabend’s own rule of counterintuitive methodology. Concerning tradition, “traditions are neither good nor bad, they simply are” (235). To argue such undermines the historical context of the tradition; in twenty years, if Feyerabend’s position had become normative tradition, surely he would think it was a good thing?

Were Feyerabend’s conclusions not so dangerous in breaking down all kinds of truth, they might be considered merely thought provoking or harmless. Feyerabend pushes scientific anti-realism too far when he states that, “it is one of the merits of deconstruction to have undermined philosophical commonplace and thus have made some people think” (xxviii). If one’s purpose in philosophy is to undermine all ability to grow in wisdom, then they are causing more harm than good. While Feyerabend is right to question and probe certain areas of thought, the goal needs to be building up knowledge, not merely watching it burn for entertainment.

Feyerabend gleefully advocates the destruction of logic, “we must be prepared for the discovery that these contortions are wildly illogical and have to be wildly illogical in order to function as they do” (198). Alongside destroying logic, Feyerabend would see reason tossed aside, as “an anarchist is like an undercover agent who plays the game of reason in order to undercut the authority of reason” (16). I hope Feyerabend is being hyperbolic in this regard; I doubt he would opt to live in a world without reason or logic (if such a thing were even possible, or the concept coherent).

Against Method uses reason, logic, and truth-claims to argue against reason, logic, and truth-claims. Most of the book serves any thinker in the philosophy of science well, offering clarity where it is so rarely found. However, one must read with an understanding that Feyerabend’s conclusions are not as playful as he presents them. If one can learn from arguments while rejecting their conclusions, Feyerabend offers a wealth of knowledge from an engaging perspective.