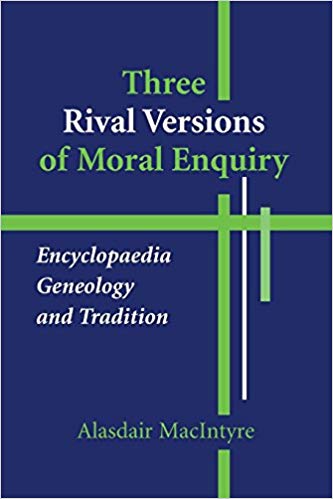 Alasdair MacIntyre’s, Three Rival Versions of Moral Enquiry: Encyclopedia, Genealogy, and Tradition came to fruition out of the Gifford lectures. MacIntyre continues to be revolutionary in his arguments concerning the Aristotelian tradition and its relation to contemporary society. While a weak agreement with his thesis may lead one to conclude that universities must reform, a strong agreement will lead to the creation of new university structures altogether. While I agree with the strong conclusion of MacIntyre’s argument, the creation of new university structures will not be something that can happen quickly or easily.

Much like in After Virtue, MacIntyre notices an area of concern in academic life, and seeks to find its historical roots before providing a corrective. The area of concern in Three Rival Versions is the fragmentation of academia. MacIntyre longs for the university system of the late middle ages, wherein different disciplines thrived together by dialectic under a constrained set of assumptions. Under this conception of the university, different universities became known for their different focuses, e.g. a Thomistic school as opposed to an Augustinian school. Within these agreed upon parameters, the different disciplines were able to pursue moral and rational enquiry in unity. For example, a Thomistic school would have a certain viewpoint of natural sciences, philosophy, and theology with enough in common to do effective inter-disciplinary research.

Instead of this unified structure, MacIntyre argues that we find ourselves in a system with incommensurable disciplines. In other words, the disciplines no longer lack any cohesive structure by which to appeal for decision making. Under the incommensurable liberal structure, to give an example MacIntyre himself does not use, post-modern literature review, utilitarian economics, and positivistic biology are all supposedly able to educate students. MacIntyre argues that the liberal university’s bringing together these disciplines without conflict is a fiction; that the positions of these experts are incommensurable with one another. The fracturing of the academic structure ought to be mourned. MacIntyre hopes to uncover how academic structures became so fragmented from their original state.

MacIntyre traces the now fragmented university through three phases, each leading to the next: Thomism to Encyclopedia to Genealogy. Thomism began as a synthesis of Aristotle and Augustine’s Neo-Platonism. MacIntyre argues the difficulty of this synthesis lies in the Augustinian dilemma, “Admit the Aristotelian corpus into the scheme of studies and you thereby confront the student with not one, but two claims upon his allegiance, claims which at key points are mutually exclusive. Exclude the Aristotelian corpus from the scheme of studies and you put in question both the universal, integrative claims of Augustinianism and the claims of the university, at least as understood at Paris” (103).

While Aquinas manages to bring a synthesis to these ideas, Aristotelianism cannot be easily contained. Conclusions of Aristotelianism become the realm of philosophy while theology maintains the realm of truth (112). Over time, Thomists continued to try and argue with their philosophical opponents but made the mistake of assuming “that they shared with their philosophical opponents more in the way of first principles and of a conception of rational enquiry than was in fact the case” (146).

As philosophy segmented from theology, and began creating its own first principles, what MacIntyre calls Encyclopedia emerges. Under this trajectory, in awe of the progression of scientific and mathematical developments, the goal of creating universal rational judgments emerged. The most powerful example MacIntyre cites of Encyclopedia the lack of names from the articles of the Ninth Edition of Encyclopedia Britannica because of the assumption that truth was being taught independent of time, context, or personhood. After the failure of this tradition became palpable, it was Nietzsche who transitioned much of academia into Genealogy.

Under the Genealogy conception, meta-narratives are fiction and rhetoric become a tool of power plays. MacIntyre notes the irony that those who wish to tear down Encyclopedia end up becoming professors because the university is one of the few places left to have any kind of analytical discussion. The Genealogist position is radical in its abandonment of theory altogether (48).

MacIntyre demonstrates the incommensurability of these different modes of rational inquiry: the seeking of a shared communal understanding of the Thomists, the seeking of purely rationalistic explanation of Encyclopedia, and the seeking to tear down all theories of the Genealogists. If all three are trying to coexist in the same ecosystem, it is inevitable that academic disciplines are fragmented and adept only at handling questions with a limited scope. The solution to this fragmentation cannot be the acceptance of all perspectives as if differences didn’t exist; rather the university should be “a place of constrained disagreement, of imposed participation in conflict, in which a central responsibility of higher education would be to initiate students into conflict” (230).

The main criticism that MacIntyre addresses is that of being called idealistic or utopian. I find such criticisms unpersuasive. If the strongest criticism offered is that MacIntyre’s system is too good to be true, the historical fact of its existence seems to defeat that argument. MacIntyre presents a vision of liberal arts education that allows meaning to once again be meaningfully sought across all disciplines.

An example of unity in diversity is found in Christian communities. An economist, philosopher, and biologist who all attend similar churches offer a glimpse into the kind of conversations that the university should offer. Within the general scope of agreement (adherence to a particular confession for example), each specialist is able to bring their own skills to bear on questions from the nature of man to ideal governmental policies. By contrast, in the fragmented university system such discussions are ruled out if the economist is a strict utilitarian libertarian, the biologist a socialist methodological naturalist, and the philosopher a skeptical nihilist. Under such an umbrella, conversations between the three specialists will be impossible due to their incommensurable first premises.

If the Gifford lectures aim at “a systematic enquiry concerning the subject matter of natural theology and of the foundation of ethics” than such a goal is doomed to failure and disunity (24). Only by a return to dialectic within a confined scope of agreement can the university again flourish. MacIntyre calls these Three Rival Versions of Moral Enquiry, but they get to the heart of rational enquiry in general, and the traditional model offers the only real way forward.