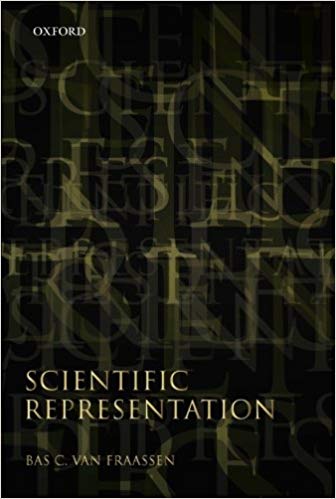 Knowing whether one is reading paradigm shifting philosophy or the ramblings of a mad man is like determining if one is looking at modern art or toddler finger painting. One rarely knows if the struggle to understand lay with reader or the artist. This line becomes further obfuscated in the philosophy of science, as the reader wonders if they’re deficient in knowledge of science, math, philosophy, or all three. Bas C. van Fraassen treads this line carefully, at times making the reader feel challenged, and elsewhere leading the reader into hopeless despair at their inability to grasp the concepts of Scientific Representation. Scientific Representation forces one to consult other sources before, during, and after the reading to reorient themselves to the argument. By the end of carefully navigating Scientific Representation, one has more questions than satisfying answers. Because Scientific Representation can be obtuse to navigate, I will argue that van Fraassen’s work is simultaneously essential, impenetrable, innovative, and poorly communicated. While van Fraassen may stay on the ground-breaking side of the line between innovation and nonsense, he does not aid the reader to see his position.

As a once scientific realist, I am grateful that my conversion occurred before experiencing Scientific Representation. Had it not, I may have rejected scientific non-realism as representative of the worst parts of philosophy: the hypothetical, hindering, hyper skepticism of people with too much time on their hands.Imagine a group of people hard at work building a house when a passerby stops and begins pointing out how they miscalculated the resources required, seem to be struggling with their current tools, and could use more direction. The house-builders, finding the man frustrating but correct, ask him to go purchase tools and assist with their project. The man merely remarks, “Oh, I don’t know where such tools are, I only know that you’re not doing it right,” before meandering away with a content whistle. Such can be the experience for realists coping with anti-realists: one endlessly frustrated by abstract particularities that have little bearing on the practical benefits of science. After all, would you rather be left with a house, or a looming fear that everyone’s houses are not as stable as you once naively believed?

Van Fraassen evangelizes for empirical structuralism by means of describing science as picture making (Bildtheorie) in part one, and deconstructing measurement as the act of “locating an item in a logical space” in part two. Van Fraassen establishes that structural realism faces drastic obstacles in the problems of correspondence and perspective. The problem of correspondence being the act of correlating the measurement from logical space into the physical space and the problem of perspective being accounting for alternative theories that fit scientific data. He then posits empirical structuralism as a welcome alternative to realist structuralism.

Part one offers van Fraassen’s most convincing argument, that science is more akin to picture making than a discovery of truth. Part one makes several key observations: representations need not correlate to what they point to, distortion can lead to more accurate representation, representations have subjective uses attached to people’s desires, and the use of approximation in most sciences. Van Fraassen’s argument in part one represents the benefits of considering the perspectives, goals, and actions of the wielder of science when analyzing their method. The historical example of Copernicanism demonstrates this point well, that desire drives scientific advancement more than data.

While part two was less lucid than part one, van Fraassen convincingly argues for the primary function of measurement being locating the user in their representative space. Van Fraassen bases his argument concerning measurement on the claim that tools of measurement create new phenomena rather than help us view existing phenomena.

While parts one and two posed significant questions to scientific realists, the crux of van Fraassen’s thesis begins to fall apart in part three. The simplest definition van Fraassen gives of empirical structuralism is, “science represents the empirical phenomena as embeddable in certain abstract structure. Those abstract structures are describable only up to structural isomorphism” (238). In simpler words, van Fraassen argues that theory explains data, math explains theory, and math is explainable so long as it remains local to the purposes of the user. The tragedy of Scientific Representation is the form in which van Fraassen presents this otherwise compelling argument.

Van Fraassen loses his argument in part three not only for unclear definitions, but also because his key arguments go against his earlier proposals. Parts one and two posit that the work of science is much more personal, subjective, and abstract than scientific realists contend. After abstracting science, van Fraassen then tries to tie it back to empirical observation, which he argues is “its purpose” (249). It appears that we can either correspond models to reality, or that we cannot; van Fraassen’s appeal to a via media is an attempt to tie down what he has already let loose. This attempt to tie models back to data requires more nuance than most readers will readily comprehend or accept.

Similarly, while part four’s distinction between phenomena and appearances arises as a boon to the reader, these definitions and clarifications come far too late in the work. Van Fraassen begins referring to phenomena as “observable entities” (283) at page one; however, the definition appears only by page two-hundred eighty-three! Also, van Fraassen uses appearance as “the contents of measurement outcomes” (283) as early as page eight! Van Fraassen waits three-hundred pages to define key terms referenced throughout the book.

Too often reading van Fraassen’s work resembles Galileo’s use of the first telescope. Poor lenses marred the results and rendered them difficult to interpret. At the same time, without the telescope, astronomical theory would have lingered in its prior state. In the same way, van Fraassen’s arguments are often distorted or clouded by unclear argumentation; nonetheless they are vital to the progress of the realist/anti-realist divide in the philosophy of science.

Despite making a way forward for the debate, van Fraassen never reminds the reader of why his argument matters. The larger context of Scientific Representation is engaging: realist and anti-realists wage war against one another and are stuck at a stalemate. Meanwhile, van Fraassen has shown thoughtful evolution from his views in the Scientific Image and attempts to find a way to get both sides talking again. One would only know the vibrant context of Scientific Representation by reading supplementary material from encyclopedias and book reviews; van Fraassen offers no practical implications for his argument. Scientists are especially left wondering the merits of adopting an empirical structuralism for their own day-to-day use.

Van Fraassen’s Scientific Representation is simultaneously essential, impenetrable, innovative, and poorly communicated. It treads the line between non-sense and brilliance so exactingly that the philosophical world will remain in puzzled reverence to the work for some time. For one looking to engage in the philosophy of science, Scientific Representation presents many worthy hurdles to overcome. After the race, one will have tested their endurance, but grown in the process.