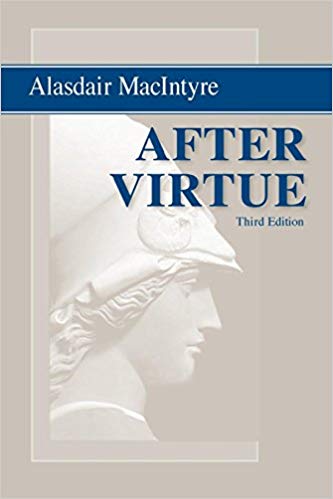 Alasdair MacIntyre’s, After Virtue: A Study in Moral Theory, caused nothing less than a revolution in ethics. As Aristotelian virtue ethics has woken from its slumber, MacIntyre provided the alarm that woke it. Like the Nietzsche whom serves as a useful conversational partner, MacIntyre finds himself running through the streets of modernity screaming “Morality is dead! And the Enlightenment killed it!” Whereas Nietzsche sees this conclusion and resigns to morality-as-power plays, MacIntyre finds hope in Aristotle’s tomb. MacIntyre doesn’t stop only at resurrecting Aristotle but begins the long process of healing his wounds.

MacIntyre makes his argument in two parts: first, the enlightenment project was doomed to failure, and second, Aristotle must be resurrected and corrected for moral theory to continue. MacIntyre spends the beginning of After Virtue crafting an historicist narrative of the enlightenment; this narrative explains the delusion of contemporary emotivism that stands for all ethics. MacIntyre rightly stands aghast at the hopeless arguments over contemporary ethical issues. He cites abortion, the role of government, and just war theory as examples of modern failures to arrive at ethical conclusions. According to MacIntyre, these modern controversies share an emotivist core in their arguments. Opponents on each side assert and counter-assert their base premises but have no shared criteria that can be appealed to for ethical resolution. MacIntyre notes the shrill fighting that characterizes modern ethics, and points to arbitrary mediations by the Supreme Court that attempt to arrive at compromise.

MacIntyre explains the impossibility of moral consensus in modernity by appealing to the enlightenment. The enlightenment project ripped the vibrant heart of ethics out of narrative and virtue driven communities and placed it instead in the cold corpse of individualistic rationalism. MacIntyre’s contention is not merely that the heart surgery was botched, but that the new body references the ancient heart as if nothing has changed.

The core of MacIntyre’s argument is more radical than he fully acknowledges. He does not merely say that rationalistic individualistic emotivist ethics is bad; he states that it uses moral language as if it existed when the modern context is incommensurable with the old. One cannot avoid the entailing moral confusion by clinging to utilitarianism or deontological ethics for hope.

MacIntyre’s initial argument, that the enlightenment project must fail, requires three complex premises to be true: first, post-enlightenment morality is grounded in emotivism, second, Hume, Kant, and Kierkegaard all fail because of their shared enlightenment assumptions, leading to Nietzsche and third, that generating historical narrative is legitimate. MacIntyre does not present an iron-clad case for enlightenment failure, nor was it his intention to; he nonetheless gets more than enough right to allow others to fill in the gaps.

MacIntyre’s second premise, that Hume, Kant, Kierkegaard, and Nietzsche are reacting to one another’s failings in moral development compels acceptance despite the argument’s simplicity. MacIntyre adeptly condenses what could be encyclopedic volumes into a few simple chapters. He argues that Hume attempts to ground morality in passion, Kant in reason, and Kierkegaard in choice before Nietzsche recognizes that all of these attempts are hopeless. The main criticism that one should level against this premise is not the ahistoricity of philosophical development as some have done; rather they should accuse MacIntyre of oversimplification.

While MacIntyre spends time refuting those who foolishly claim that philosophical developments cannot be fit into a narrative history, he only briefly acknowledges the criticism that he has understated Hume and Kant’s own positions. He remarks that Annette Baier and Onora O’Neill have upcoming articles criticizing him along these lines, to which he responds with “a good deal of sympathy.” Because MacIntyre is writing a broad overview of historical development and not mounting dense proofs of his positions, he can be forgiven for his simplicity. MacIntyre could’ve spent more time elucidating this argument and less time on the fiction of managerial expertise, but he seems to be content allowing others to write the Silmarillion to his Lord of the Rings. And in the final analysis, the more significant work is obvious.

Many academic communities seem friendly to MacIntyre’s first argument, that the enlightenment has led to emotive ethics. The desperate response that historicity is illegitimate is unfounded. The role of historical narrative as events impacting each other has been seen from Aristotle and Augustine to Hegel and Reid. To criticize MacIntyre along these lines provides fodder for those who wish to marginalize modern philosophy as ivory tower nonsense.

While MacIntyre’s argument concerning the enlightenment stands against criticism, his healing of Aristotle’s wounds remains incomplete. While MacIntyre has applied the initial disinfectant to Aristotle’s wounds, the work remains of applying ointment and bandages. MacIntyre seems to generalize virtue ethics as the solution by means of showing how the system functions in social communities, according to narrative structures with a telos of human life. While social, narrative, and telos are all key aspects of the Aristotelian tradition that MacIntyre brilliantly argues for, they do not alone solve Aristotle’s problems.

That MacIntyre has become a Thomist only after publishing the first edition of After Virtue shows a key development of his thesis. He has found in Aquinas greater elucidation of Aristotle’s project that was missing in After Virtue. His remark that “Aquinas was in some respects a better Aristotelian than Aristotle,” and his use of him in later works demonstrates where Aquinas can fill in some of the gaps that were left open (3).

The largest of the wounds to the Aristotelian tradition remains the charge of relativism, to which MacIntyre responds in his postscript. While MacIntyre rightly shows that communities steeped in virtue ethics can make non-emotivist ethical decisions, he doesn’t explain how different communities with different virtues might show their own superiority beyond choosing the one with the least problems. Robert Wachbroit criticizes that “distinct, incompatible, and rival traditions of the virtues” can exist under MacIntyre’s thesis. MacIntyre responds, “in this, he is right” (264). MacIntyre never fully rebuts Wachbroit’s accusation. He hypothesizes that in such a condition both traditions may share enough in common to evaluate each other and a synthesis reached. But beyond this, he offers that “my position entails that there are no successful a priori arguments which will guarantee in advance that such a situation could not occur,” and that “To show that there is no paradox here is therefore one more necessary task; but it too can only be accomplished on the larger scale that the successor volume to After Virtue will afford me” (264). After Virtue then does not fully heal this Aristotelian wound by itself, nor does it ultimately need to.

A final remark can be made of After Virtue concerning itself western focus. As a modern revival of various eastern moral structures from a western perspective demonstrates, seeing hopelessness in Kierkegaard’s ethics of choice and later analytic philosophy, we may be tempted towards the East as a way forward. I’ll merely pray that doesn’t occur, that the failings of Eastern ethics are apparent, and continue to avoid the plague of yoga studios flooding my community.

MacIntyre’s radical work offers a bleak situation and a hopeful answer. Stating that we have lost the context behind words as commonplace as “good and bad” is indeed a radical claim. For as radical as it may be, MacIntyre has successfully resurrected Aristotle from the grave. The question should be asked, “is After Virtue good or bad?” It seems that after all there are very few people who can answer.